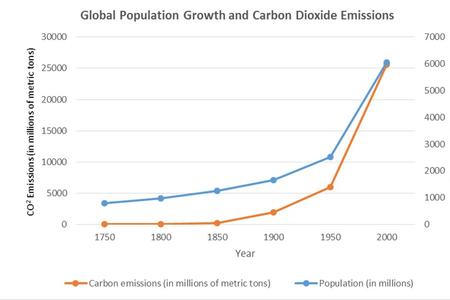 What a great subject it was. Climate change had all the ingredients for a fascinating scientific issue—large and complex implications, loads of room for disagreement, all sorts of pluses and minuses, pointing the way toward a need for invention and change. I found the subject fascinating. I first heard about it in the 1970s and began reading about it fairly often starting about 1980.

And then the activists, politicians and mainstream journalists got hold of it, in the late 1980s, and a fascinating issue was corrupted into a political football.

The concern about global warming was entirely legitimate, and still is. We release into the atmosphere each year maybe 37 billion tons of carbon dioxide (or 10.1 billion tons of carbon), according to a recent estimate (for 2018). It is released primarily from fossil fuel combustion, and CO2 absorbs infrared radiation, absorbs it and either re-emits it or converts it to kinetic energy. Either way, it adds to the aggregate ambient energy. Possibly a quarter of the CO2 we emit is dissolved into the oceans from the air and a quarter absorbed by land and the vegetation on land, again using estimates I have seen without presuming to know how accurate they are.

At the rate we are going, CO2 will increase from about 0.03 percent of the atmosphere at the start of the industrial revolution to about 0.06 percent by the end of the 21st century. That is not a large percent of the atmosphere, just six one-hundredths of one percent, but a common mid-range estimate is that it will increase average global temperatures by 6 degrees Fahrenheit above the temperatures of preindustrial times. One or 2 degrees of that increase have already occurred, supposedly, so 4 or 5 more are still to materialize by the year 2100. The rise in temperature is predicted primarily because of assumptions about secondary effects, and those effects primarily come from increased water vapor in the air as a result of evaporation. H2O, like CO2, absorbs and re-emits infrared radiation.

​This could be a big deal or not so big. The estimates of impacts are based on assumptions plugged into computer models, and there has been much tinkering to improve the computer models as flaws are found. Still, there is the potential for human-induced climate change. An average temperature increase of 5 more degrees by the end of this century is the equivalent of moving from Chicago, Illinois, to the southern end of Illinois. It is like moving from Allentown, Pa. (an hour's drive north of Philadelphia), to Baltimore, Md. (an hour's drive south of Philadelphia). It is presented by activists, politicians, journalists and some mediocre scientists as apocalyptic. Yet despite the exaggerations—the silly rhetoric calling it an "existential" threat to our species—it is a real issue, albeit a long-term one, not an immediate crisis.

​
Some other issues are more important or urgent than climate change: strains on energy supplies, strains on fresh water supplies, increasing habitat destruction (overdevelopment) and, above all else, population growth. To a large extent, worries about oil supplies, water supplies, habitat destruction and human-induced climate change are subsets of the population problem. They are consequences of population growth, of so many people needing so much energy and water and food.

Climate change from the accumulation of CO2 is gradual. It is so gradual that its effect is difficult to disentangle from natural fluctuations of climate, which we do not even come close to fully understanding. There was a slump in average temperatures during the mid-1800s, a rapid increase in average temperatures during 1860-1880, another rapid increase in the early 20th century, and a leveling off of temperatures in the middle of the 20th century. Those trends could not be blamed on fossil fuel combustion, or not primarily blamed on that, because manmade CO2 emissions had not yet grown to the levels of current concern and were not fluctuating up and down in a manner parallel to those trends.

Gradual changes do not attract research dollars as readily as catastrophic near-term threats do, so a rhetorical inflation set in. Starting in the 1980s, academic researchers competing for grant money issued ever more melodramatic warnings of disaster from climate change. The academic who wins a seat on the gravy train can assign tiresome teaching duties to an assistant, and the grant recipient then can pursue dreams of career advancement by making a name through research. It is an important and fundamental factor in an academic's life. Even without research results, the publicity from promoting fears of climate change can be rewarding. As an extreme example, the politicized academic John Holdren drew attention through his advocacy rhetoric on climate change (he was a physicist, not a climate scientist) and got himself named top science adviser to President Obama. Nice gig.

Politicians, activists and journalists thrive on exaggeration, of course. It often seems you will be ignored in politics or journalism if you do not exaggerate. So we are assured by many people that we face global mega-catastrophe if we do not impose an array of direct or indirect taxes (especially carbon taxes) on people, mandate renewable energy and subsidize wind farms and solar farms. What we need are new energy sources, not punitive taxes or intermittent, unreliable, weak sources of energy.

New energy sources are always possible, and sooner or later they are absolutely essential. Oil, natural gas and coal are not renewable resources. We will run out of them. And because it may take several decades to develop reliable alternatives, we cannot wait for the oil and other fossil fuels to run out. We need to focus our creativity (and money) on inventing effective alternatives. We simply must.

Wind and solar energy are unlikely to be solutions, unless breakthroughs are achieved in the power of those technologies, plus dramatic advances in battery technology or other technology to allow storage of intermittent energy from times of surplus for times of shortage. Solar is useful today for modest amounts of “off-grid” energy—electricity for low-volume uses in remote locations where there is no hookup to the grid. This does not mean it will always be inadequate. Breakthroughs happen. But what is being deployed now is not breakthrough technology.

Wind farms in 2018 met 6.5 percent of U.S. electricity demand. In Texas, which has a separate grid, wind provided 18.6 percent of electricity in 2018. Not bad. But not adequate to replace fossil fuels, which provided more than 69 percent of Texas power. How much higher can wind and solar energy go without destabilizing the grid with its fluctuations? No one knows. It will be interesting to learn. Solar energy met 2.3 percent of U.S. electricity demand in 2018. Not much. Meanwhile, global demand for oil and natural gas are on long-term rising trends. Carbon dioxide concentrations in the atmosphere continue to rise, year by year, despite more than two decades of incessant promotional noise about the wind and solar power sectors. We need to create better alternative energy sources and at the same time find ways to remove carbon dioxide from the atmosphere.

The notion that carbon taxes or heavy-handed government regulations can be effective tools for driving basic technological change has no basis in history or common sense. Punitive government strategies such as excise taxes have never led to the invention of important technological solutions to anything in the modern world. Think of the history of technology, of the great inventions of people like Thomas Edison, Nikola Tesla, Enrico Marconi, Alexander Graham Bell, Karl Benz, Alexander Fleming, the Wright brothers and others. They did not invent the things we associate with their names under the stimulus of punitive taxes or regulations. Edison did not invent the light bulb because someone slapped a tax on candles or firewood. Bell did not invent the telephone to get around a regulatory restriction on letters or messenger boys. The Wright brothers did not invent powered flight because someone levied a punitive tax on ground transportation. And so on. Use your knowledge and thinking ability to explore this. Analyze it. Be critical.

The notion that punitive taxes can effectively manipulate human behavior to solve climate problems is an idea coming from financially comfortable economists, academics and activists who imagine systems of taxes and tax rebates designed to force people to do what government has not yet compelled them to do. But most energy consumption is not discretionary—a matter of choice that can be foregone without difficulty. Carbon taxes would be fundamentally unfair to lower-income citizens and might be meaningless to prosperous citizens (like the comfortable people advocating the taxes). If tax rebates take the sting out of carbon taxes, the taxes may accomplish nothing. To work, to manipulate human behavior, they must cause economic pain.

In France in November 2018, protests erupted over fuel taxes, specifically a carbon tax applied to fuel. Roads were blocked around the nation in a response by the French public to fuel prices that were two to three times what Americans pay and were heading higher. Parisian police used tear gas, water cannons and rubber bullets as the protests continued for months. President Emmanuel Macron was dismissive of the peasants until it became too politically embarrassing, then he allowed his government to cancel a carbon tax hike, though that may be a temporary palliative. To him as to many politicians and activists, the public needs to be manipulated through economic pain for the public's own good, even if that produces what is called "energy poverty." In France and in Europe generally, energy taxes often are little more than a gimmick for plugging budget holes rather than financing technological innovation.

The wind farms and solar farms sprouting across America and Europe and China are not innovation. They are a diversion of money from where it is needed. We need to achieve breakthroughs to new energy sources. That requires money. The billions of dollars being spent annually to subsidize wind and solar farms should be spent instead on energy research. If those dollars had been spent on research over the last few decades, we would be farther along toward inventing new energy sources that might avert the eventual shortages of fossil fuels and the possible hazards of global warming. The commercial wind farms and solar farms are not research. They are deployments of existing technology, not breakthrough technology. They are nibbling at the edges of a global issue.